NOTE: much of the data for this section was gleaned from the well researched and informative book "The Great Southern of Spain Railway Company Limited 1887 - 1936" by Joaquín Gris Martínez.

Hett, Maylor & Co Ltd (HM) were the construction company for the line. Having said that, they actually subcontracted most of the work out to Spanish contractors such as George Loring (who later caused many problems).

It is interesting to note that English engineers were seen in Serón in March of 1885 even though Hett, Maylor & Co wasn't formed as a company until 10th June, nor The GSSR until the 24th October of that year. In fact, Edmund Sykes Hett and George Winfield Higgin were seen in Lorca that April where, it seems, they were setting up the company.

Due to the backwardness of that part of Andalusia, much time was spent in the appropriation of land for the railway. The land for each kilometre of track had to be bought, often from rich landowners who had previously promised to donate it and now were wanting to charge exhorbitant fees for it, using the 'Law of Appropriation', ie 'Compulsory Purchase'. Sometimes this required going to court and this caused many problems for The GSSR (see here). In addition, the route wasn't finalized and there were changes being made up until the last moment. All of this took the company to April of 1886 when much of the political and legal work was completed, the route having been finalized by May 1886. At this time, the Ministerio de Fomento (ministry of public works) extended the somewhat optimistic completion date to 31st December 1887. It is nice to know that the Spanish Government had a sense of humour. At long last, works started in October 1886, one year and seven months after the first investigations. It would be easy to blame Hett, Maylor and The GSSR for this delay, but the levels of bureaucracy in Spain at this time can only be imagined. In addition The GSSR and Hett, Maylor had to raise funds by floating the companies on the British stock market, as they would only receive grants on completion of works, by section.

It was noted in Guadix in June 1886 that studies had commenced on the Guadix - Granada section.

In February 1887 works were in progress between Km7 and Km27 (this is the stretch between Lorca and Almendricos) employing 1,700 men. Additionally, there was a disembarcation of 4,000 tons of rails from England. In February of 1888 there was a delivery of 300 boxes of dynamite for the excavation of tunnels. Soon after there were a number of deliveries of sleepers from Britain totalling 67,920. 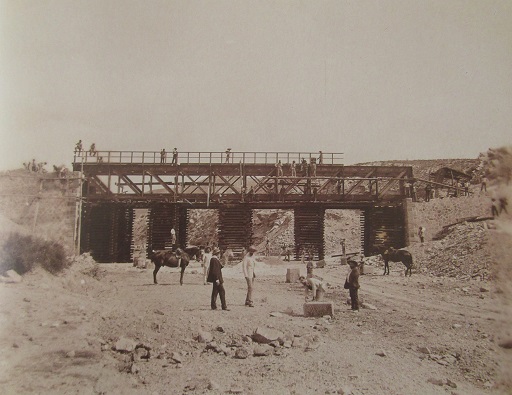 In March of 1888 the works on the embankments and cuttings between Km24 and Km30 were finished. Very soon after this track laying started. On the 4th March 1888 two steamships arrived in Águilas Port to unload parts for bridges. The construction of iron bridges required the use of scaffolding, usually made from sleepers piled on top of each other, the assembled bridge section then being dragged across the scaffolding on rollers and jacks. Once the span was aligned correctly, the jacks were lowered and the scaffolding dismantled. By March 1888 32 culverts had been built.

The photograph (left) is of the bridge over Rambla Higueral. In it can be seen blocks of travertine awaiting use and sleepers being used as scaffolding.

On 9th February 1888 the steamer Hilda unloaded two 2 ton iron cranes weighing in total 9,605kg. At the same time Etna and Heda brought 36,169 sleepers, and on 19th March Ciscar brought 360,929 tons of bridge parts. By April things were really moving, with the works on embankments and cuttings half a kilometre from Águilas, tunnels being excavated and bridges built. In May, more bridges arrived in Águilas from Antwerp as well as a huge amount of ironware, tools etc. The bridges were pre-fabricated by August Lecoq in Halle and supervised on site by his son Jean Louis Lecoq Smith. By July of 1888, the Lorca - Alcantarilla section and the branch line to Águilas were very close to completion, thanks to the engineering and management skills of Eduardo Schülz, Pelayo Clairac Sáenz and José Novaes. 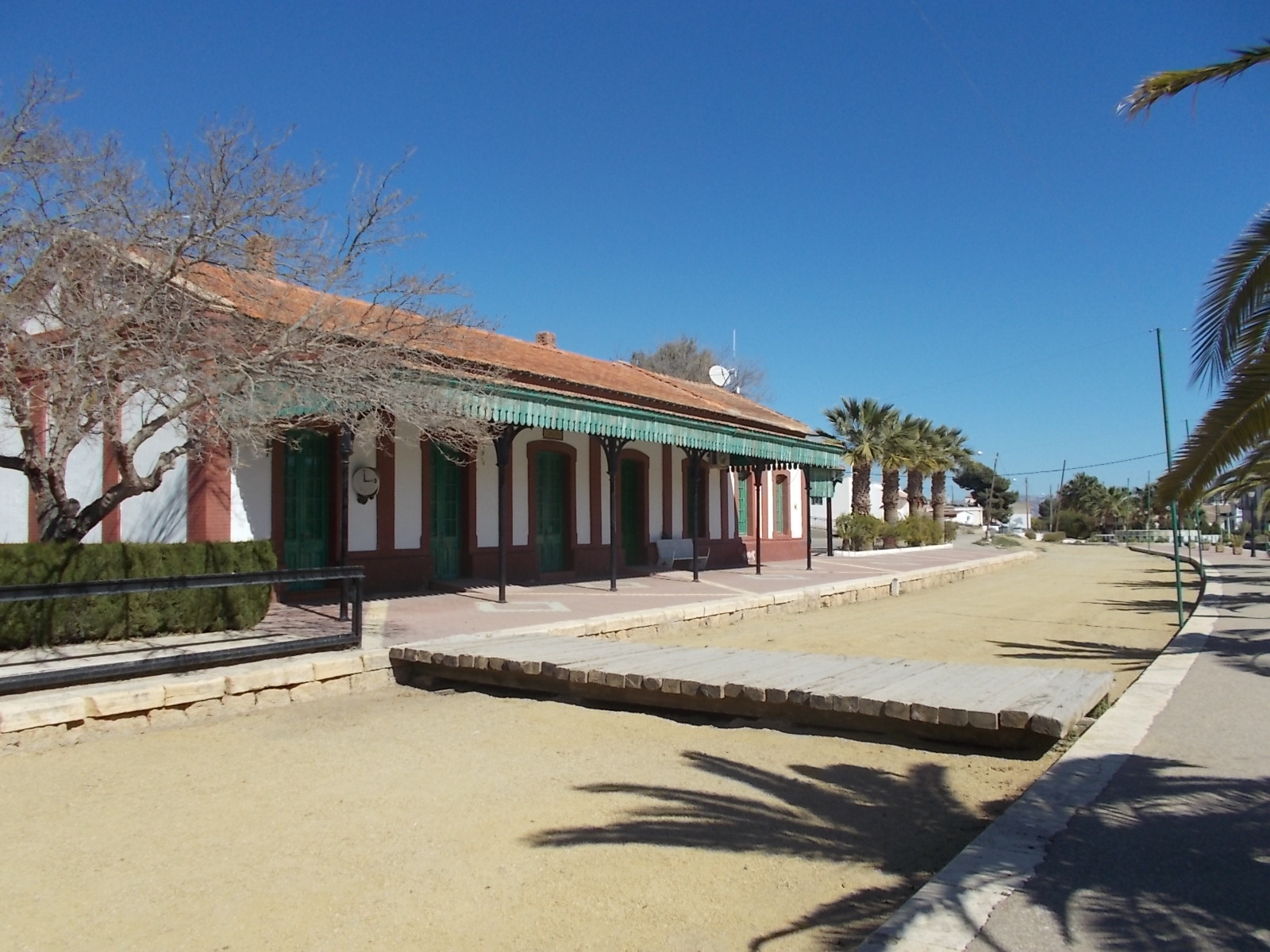 By July of 1888 the main Aguilón tunnel was 120 metres out of 200 metres completed. This doesn't include the 340 metres of cuttings either side of the tunnel proper. Cuttings and embankments were going well and work in Almendricos station was marching on apace.

In September of 1888 21,531 sleepers with a tonnage of 1,226 were unloaded from Etna. By now the preparations for laying the track were completed with just the bridges to be placed. In December of 1888, it was announced in the local press that the land for the construction of Zurgena station had been expropriated and there was a musical band to celebrate the start of works.

In February 1889 Hett, Maylor started work in Tíjola with plans to undertake the construction of the line through the province of Granada, thus starting work on the already purchased land between Tíjola and Serón. Incredibly, they still didn't have concrete plans for the inclines that they would encounter along the Almanzora Valley so it seems that they were very much 'playing it by ear' as they went along. From this point, they would be able to resume works uninterrupted right up to Guadix.

At this point, due to the construction of the line being observed, many villages and towns tried to get the line diverted to them, notably Cuevas de Almanzora arguing that it was more important than Zurgena and demanding that the line passed through its town. Strangely, there is a 'Station Street' (Calle de la Estación) in Antas just 6.5 kilometres from Cuevas de Almanzora, so maybe the towns in the area were anticipating the railway line passing through there.

In April 1889, the works were two kilometres from Huércal-Overa and building had started on Sutullena station. On 20th January 1890 the Murcian newspaper La Gaceta de los caminos de hierro announced that a locomotive had already traversed the line between Águilas and Pulpí.

In February of 1890, two of the largest locomotives (Moguls) were tested on the track and these were found to work well. 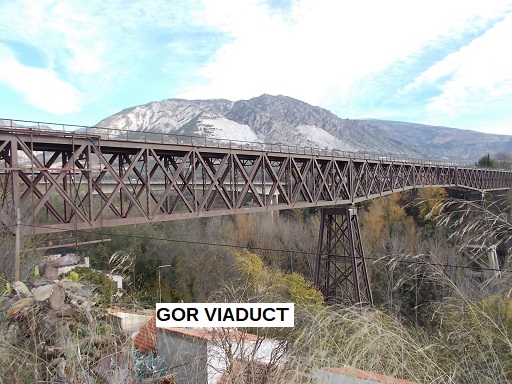 In March of 1890 the government engineer Sr Morgurutha finished inspecting the branch line, which he passed favourably, saying that the Lorca - Águilas line was the best in its class. In addition, a large amount of rolling stock arrived on the ship Gatience which was promptly unloaded and assembled (see below). In April the newspaper El Defensor de Granada stated that works were almost finished between Lorca and Huércal-Overa station and that within months a locomotive would be runnng on that section. Additionally, the section between Huércal-Overa and Hijate station had been levelled and work had started in the area of Gor with extensive studies of the gorges Baúl, Balata and Gor. See First line.

On the 20th July 1890 there was an inauguration ceremony in Almendricos to celebrate the termination of works on the Águilas to Lorca section. Most of the engineers and technicians were present and a grand buffet was provided. At this time Hett, Maylor & Co were employing 2,400 workmen on the section between Almendricos and Granada and had already moved 50,000 cubic metres of land (much of which was rock) in the formation of cuttings and embankments.

Then, on 11th August 1890 Hett, Maylor & Co declared bankruptcy. Whether The GSSR saw it coming or not, it must have still been a profound shock. The question then was whether they would be able to continue with construction and finish the line. Bravely, they did continue with construction but in the end were unable to finish the section between Baza and Granada, selling the concessions to other companies. Miguel Lloret Baldo covers this in his reports in the Boletín. Essentially, The GSSR had to restructure the company to stay solvent and not be dragged down with HM. However, this does beg the question as to the fact that HM were to be paid on completion of all works to the satisfaction of the GSSR technicians, so was HM paid in advance of the termination of the line? The GSSR was determined to carry on with the line and to this effect had to pay off some of HM's debts, namely 200,000 pesetas for a Mr Dickson to pay creditors in front of the mayor in Baza, and the same in Moreda via Mr Purdon. Additionally, Mr Higgin was charged with negotiating with Mr Loring for him to continue with the construction. Loring was a subcontractor who had caused much trouble for HM. 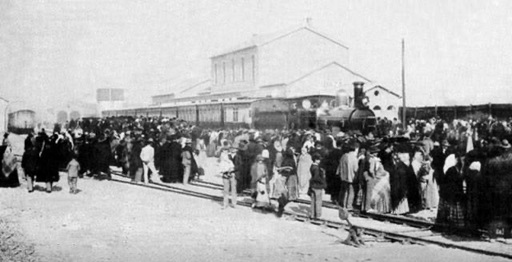 Eventually, on 11th December 1894 The GSSR completed the line at Baza station with an inauguration banquet which was well attended.

There is scant information about exactly how much construction The GSSR had carried out before selling the concessions for the Baza to Granada sections but it seems that many bridges had been bought for the first line which was later abandoned, construction continuing on the second route up until the concessions were transferred.

The sections were opened as follows:

THE REAL REASON FOR THE LINE 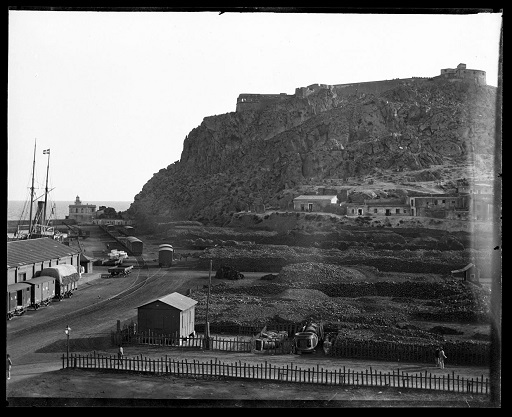 It was about this time that The GSSR was trying to get authorization to build El Hornillo but was facing strong resistance from The Port as the company feared the competition. This was ridiculous, really, as the port was ill equipped to handle any type of ore, all of which had to be loaded onto steamships by hand in esparto baskets (click on an image to enlarge). One can see from the 1898 Gustave Gillman image on the left (Courtesy of the Archivo de Murcia Ref: FOT_NEG-018_054) the paucity of loading equipment. Additionally in this photograph one can see the tracks that had been laid by The GSSR which were used for the unloading of materials and equipment. 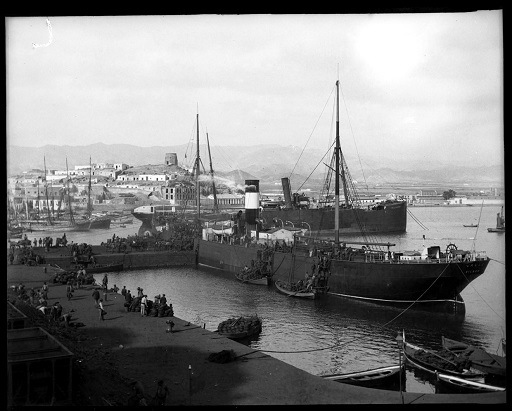 In the photograph on the right, also by Gustave Gillman (Courtesy of the Archivo de Murcia Ref: FOT_NEG-018_083) one can see men loading ore onto the steamship in esparto baskets. This was ruinously expensive, not just in labour costs but the time that steamships had to lay in port, time being money. It also seriously limited the amount of ore that could be exported through the port, and thus the amount mined.

The main problem with the construction of El Hornillo was that The GSSR didn't have enough money to build it, so it was time to float another company to be able to rustle up the funds. The Hornillo Company Limited was really just an off-shoot of The GSSR, with A.F. Judd as secretary to both of them and Thomas Harrison as chairman (also chairman of The GSSR 1907 - 1923 and The Bilbao Iron Company in 1876). The Hornillo project was overseen by Gustave Gillman with the assistance of James Livesey. This amazing project was responsible for millions of tons of iron ore being shipped between 1903 and the late 1960s when the mines closed.

The (incomplete) list below shows the amount of material brought through Águilas port during construction of The GSSR: