This is a translation of an article by my good friend José Antonio Serrano Navarro regarding the mines of Bayarque:

A GENERAL HISTORY OF THE MINES OF BAYARQUE 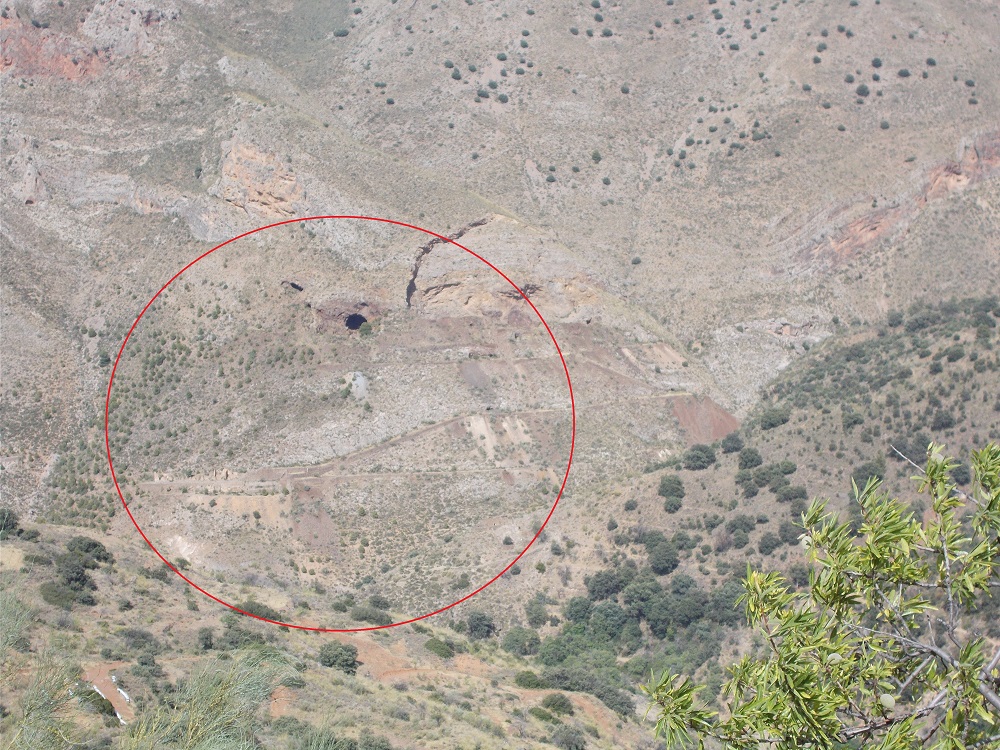 In this historical article, we study the history of mining in the borough of Bayarque (Almeria) from the beginnings of the industrial exploitation of the town's mines until the end of the mining activity. 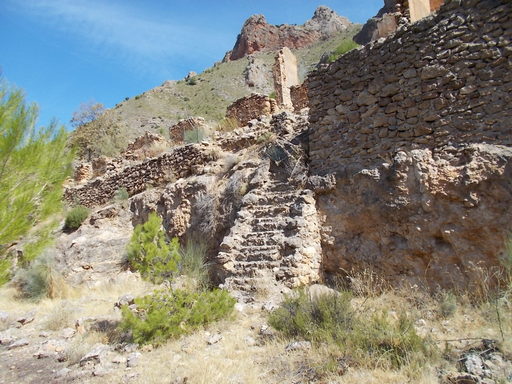 Steps up to the loader, the accommodation
and management blocks.

The Cuevas Negras Mines can be found on the western aspect of the Mesas de Bayarque mountains, near to the area of El Chopo (Bayarque) and on the right bank of Río Bacares which descends to where it meets Río Almanzora.

Originally thought to be a profitable industry and the key to the mining area of Bacares and Serón the Dutch mining company W.H. Müller & Cía. originally rented the mine to a society called Maurel y Fernández on 30th September 1898 (it is unknown if a contract was actually signed) and afterwards the Madrid solicitor Felipe García Mauriño y del Valle, would transfer the rental to that mining company1. In 1904 the construction of an aerial cable was started to transfer the iron ore to the Lorca-Baza railway line (of which we will speak later)2 and in 1910 the mines were closed due to the exhaustion of iron ore. In all, a total of 367,200 tonnes of iron ore was mined (the annual average varied between 65,000 and 70,000 tonnes of ore)3 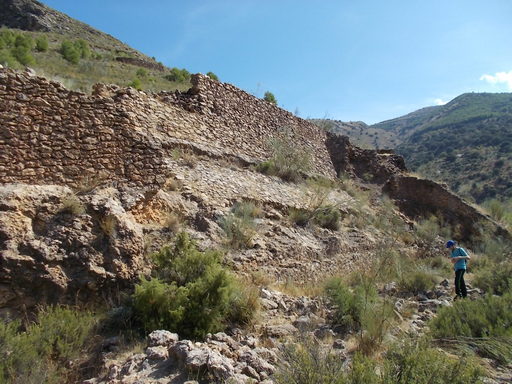 The director of engineering of W.H. Müller & Cía. in the times of exploitation of the mines of Cuevas Negras was Otto Bornebusch Neese4.

This mine was known for various extractions, opening galleries of 1,051 and 1,075 metres (above sea level), having access to the surface by means of two tunnels which circled the iron ore lode at these two levels. The upper gallery was the working centre and the lower one was where the iron ore was extracted. To extract the ore, intermediary and superior levels were dug to increase the lifting points. The mines were created using horizontal and vertical shafts, and as the iron ore lode was irregular, the passageways were variable. In addition a mine was dug to extract iron ore at 1,027 metres above sea level. Studies into the rest of the mine didn't give good results and for this reason, mining stopped when the other levels were exhausted [...] . The ore was transported down an inclined plane from 1,075 to 1,051, going from this to the loader via another double track inclined plane.

The exploitation of Cuevas Negras was very dangerous as all that interested the company was to extract iron ore to make money. The consequences of ignoring the Mining Plan that was presented to the Mining Police was a huge number of accidents, resulting in a cave-in of the mine, however, miraculously no-one was killed as the 250 workers that day were having breakfast5. In addition we have various stories of fatalities such as that which occurred on 22nd February 1904 in which the worker Miguel Fernández Ferreira died as the result of a cave-in6 others of the same type occurred between 1900 and 1910, that we know about through oral testimonies7. So, inicially, it was estimated that 60 workers had lost their lives, but recent studies by the 'Sociedad de Estudios Históricos "María Navarro Encinas" have elucidated that the number of fatalities was somewhat less. However, the oral accounts seem to co-incide with the facts of the terrible working conditions of the mine. 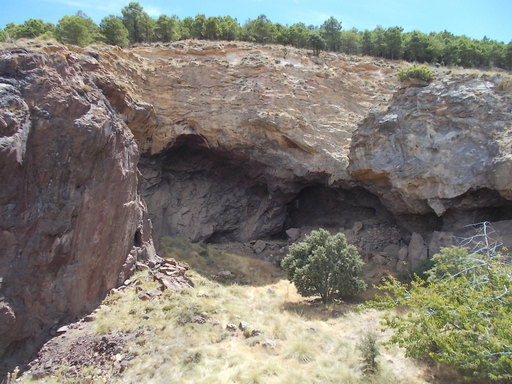 The Gran Coloso mine.

The Gran Coloso Mine can be found on the borders of Bayarque, Bacares and Serón in 'El Cerro de la Alameda' and near to the El Layón springs and 'El Cortijo de La Roasraría' (Bayarque).

This mine is famous for its many changes of ownership (18). José María Fernaández Torrecilla, from Caravaca, registered the mine for the first time in 1881 and passed it on to Francisco Hernández y Castillo in October of 1883. In 1887 the concession expired due to lack of payment of taxes and thus, in 1888 went to auction, being won by Fortunato Fernández Jiménez by paying 240 pesetas (10% of the price of the lot). He then sold the mine to his brother Joaqín who then rented it to the mining society Maurel y Fernández. He later sold the rights to the French company 'Société Minière de L'Espagne Meridionale' until 1907, when it was rented by Maurel y Fernández to the company 'Eugenio Grasset y Echevarría' who, in 1911 installed an aerial cable to carry the iron ore to the Lorca-Baza railway (of which we will discuss later). The crisis of the First World War and the market difficulties for the sale of iron ore from this mine which had more impurities than other mines in the area resulted in its closure in 1916, after five years of working8.

The director of engineering for the Gran Coloso mine was José Verardín Ferretti9.

The outcrops of haematites that were found in the triasic limestone in the eastern margin of Leyón, in the area of La Rosariera, was where mining activity started. Having obtained good results, they continued the exploration by means of drill holes which circled the lode, allowing them to evaluate its extent; later they started the exploration of "Los Mosquitos" (1,441 metres above sea level) and Galería Hundida, nearest to the gorge and the gallery (1,467) at the base of quarry Number 1 for the extraction of mineral [...] . The mineral was carried to the main loader by a 95 metre inclined plane that dragged the ore from the lower mine to the top of the loader. The upper levels of mines communicated via inclined planes 1 and 2 by which wagons of 750kg [According to Gómez Martínez y Coves Navarro, the wagons were by Koppel and weighed empty 500kg and had a loading weight of 750kg11]. The gauge of the tracks was 600mm [500mm according to Gómez Martínez y Coves Navarro] and 5kg per linear metre [...]. The exploitation was effected by horizontal mines that gave access to the galleries, with filling and a the use of a good work plan12.

The number of tons of iron ore extracted from Gran Coloso from the start of exploitation to the end averaged 148,281 and 165,879. The first figure was the weight of mineral that passed through the Hornillo Loader via The GSSR and the second refers to the weight extracted according to Ricardo Guardiola and Alfonso Sierra13.

The aerial cable from Gran Coloso and Cuevas Negras. 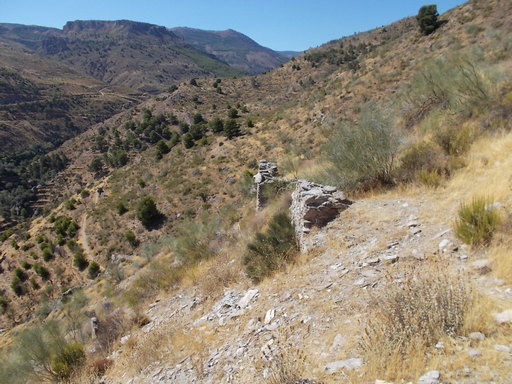 A pylon support. According to the English investigator Maxwell A Kite,
from the orientation of the bases, it was probably a tensioner.

The Cuevas Negras aerial cable was the property of 'W.H. Müller & Cía.', and was built by the Polish company 'J. Pohlig & Cía.' from 1904 and in 1907 was transporting a considerable amount of ore. In 1910 it ceased functioning and in the February of 1911 the company 'Casa Grasset' dismantled the section between Cuevas Negras and the Ángulo (situated near to La Fuente de las Parras de Bayarque) and was remounted as the cable for Gran Coloso, also using the cable from El Ángulo and the Algaida loader near to Tíjola station (94.415km on the Lorca-Baza railway). The Gran Coloso cable and the Algaida loader stopped functioning in 1916 as a result of the paralysation of mining13.

Regarding the technical details of the cables, they were teleferic bicable by Bleichert15 of 6.7km in length (7.8kg after the transfer of the upper cable to service Gran Coloso16) with the intermediate Ángulo station. Each bucket weighed 175kg empty17 and 250kg full17 and were 73 metres apart on the wire18. The buckets travelled at a speed of 2.5m/s (5.6mph) and had the capacity to transport 300 tonnes of iron ore in 10 hours19. The pylons were made of steel and wood20 and their bases of stonework21.