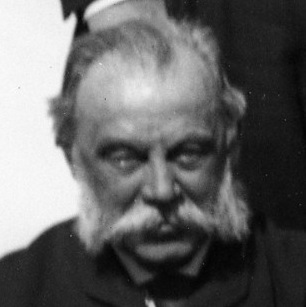 George was born on 11th May 1831 and entered the world of engineering at a very early age when he was taken to see a large cotton mill, his particular interest being the giant steam engine that drove the mill's machinery. He attended school in Preston and by the age of ten he had become a proficient draughtsman.

GEORGE HIGGIN, son of the late Mr. Thomas Houseman Higgin, who was Mayor of Lancaster in 1835 and afterwards general manager of the Ballymena and Belfast Railway, was born on the 16th of January, 1833. Be was educated at Lancaster by private tutors until 1845, when he went to the Grammar School at Preston. At nineteen years of age he entered as an articled pupil the office of the late Sir Cllarles (then Mr.) Lanyon, and at once showed so much aptitude and resource as to be entrusted with important works in advance of his years. He took part in the survey and construction of the railway from Ballymena to Portrusb, and shortly afterwards was entrusted by Mr. Lanyon as Resident Engineer with the responsibility of the survey and construction of nearly the whole of the branch line to Cookstown, which included two important viaducts-one over the river Main at Randalstown, and one over the lower Bann at Loorne Bridge- carried out under a contract with the late Mr. William Dargan. On the completion of these works Mr. Higgin proceeded to Brazil in 1855, and for two years acted as principal Resident Engineer on the Mangaratiba Serra Road, under the late Mr. E. B. Webb. This was a macadamised carriage-road over the Serra, in the province of Rio de Janeiro, constructed for the purpose of bringing down to the Port of Mangaratiba the coffee and other products of the interior. He was next for two years District Engineer on the Bahia and S&acedo Francisco Railway under the late Mr. C. B. Vignoles, Past-President Inst. C.E. Unfortunately he contracted yellow fever, and subsequently a severe attack of congestion of the liver compelled him to return invalided to England in 1860. In the following year Mr. Higgin, having recovered his health, went to Spain with the object of making a complete Ordnance Survey of the Peninsula for the Spanish Government. Shortly after commencing the preliminary steps, however, small-pox broke out amongst his staff, and, other difficulties arising with the Spanish Government, the survey was eventually abandoned. Having acquired a thorough knowledge of the language and become acquainted with many influential people in Spain, Mr. Higgin, thinking that the prospects of engineering in that country were promising, decided to settle in Madrid in 1862. From that date to the year 1870 he was occupied in carrying out irrigation canals, land reclamations, tramways and hydraulic works, and, having acquired the reputation of an authority on engineering matters in Spain, was largely consulted as to schemes projected in that country. Among the more important canals he reported on are those of Orbigo, Del Ter, Riegos de Ampurdan, Merida, Seville, Talavera, Valladolid, Jarama, Tagus, and Logroño.

In 1864 Mr. Higgin was associated with the late Mr. J. F. La Trobe Bateman as Joint Engineer of the Henares and Esla Canals, the construction of which he described in a Paper presented four years later to the Institution (ICE). For that Paper, which was entitled "Irrigation in Spain", the Council awarded him a Telford Medal and a Telford Premium of books. Mr. Higgin also made plans and applied for a concession for a system of tramways throughout Madrid, with extensions to Carabanchel and Navalcarnero, small suburbs of that city. His scheme was approved by the Government authorities, but in those days tramways did not meet with any support in Spain, and as no capitalist would take the matter up it was abandoned. The present system of tramways in Madrid has been carried out by various companies on almost exactly the same lines as he proposed.

Among the more important reclamation works in which Mr. Higgin was interested were those of the Rosas Marshes, Laguna de la Jana, Seville Marshes, Cuadros de Castellon, Albufera de Alcudia, San Carlos de la Rapita, Almenara Marshes, and the Torre Blanca Marshes. The three last were carried out. He also reported on behalf of English firms on the cultivation of madder, esparto, and various other fibrous plants indigenous to Spain. Early in 1871 he went to Monte Video for Messrs. Waring Brothers, to conduct important negotiations with the Government of that country in connection with the Central Uruguay Railway.

In 1872 Mr. Higgin, who had acquired considerable experience of mining in the Peninsula, was selected by Mr. Edward Woods, Past-President Inst. C.E., to act as Consulting Engineer in Spain, on the works of the Bilbao Iron Ore Company, which had been formed for the purpose of constructing a railway and port for the carriage and shipment of the produce of the extensive mines in the rich iron ore districts of Somorrostro and Galdames. These works were fully described in a Paper presented to the Institution in 1877 by Mr. F. C. Barron, the Resident Engineer. In 1875 Mr. Higgin proceeded to Buenos Ayres as Mr. Bateman's representative on the improvement works of that city. The original engagement was that he should remain there one year to carry out certain negotiations and to report on the state of the works. It resulted, however, in his remaining as Chief Engineer until 1878, during which time great progress was made. While in Buenos Ayres he turned his attention to water supply, and made several analyses of well water, rainwater in tanks, and water taken from various parts of the River Plate and its confluents. This led to some interesting experiments on the filtration of water, from which he was able to elucidate the true head of water on a filter, and the almost impossibility of preserving a uniform speed in filtration. These experiments were subsequently presented to the Institution in the form of a Paper, for which he received a second Telford Premium.

During the years 1878 and 1879 Mr. Higgin was engaged in connection with the Riachuelo Docks, Bilbao Docks, River Plate Lighthouse, Rosario Pier, and other minor works. In 1881 and 1882 he was occupied in preparing plans and in obtaining from the municipality the necessary concession for the Seville Waterworks, and he ultimately negotiated and obtained the concession upon which the works were subsequently carried out by Messrs. Easton and Anderson. He embodied the information thus obtained in a paper which appeared in the Proceedings of the Institution in 1884. While in Seville he prepared plans, and subsequently obtsined a concession for the lines constructed by the present tramway company of that city.

In November, 1884, Mr. Higgin commenced a complete survey of the line now known as the Great Southern of Spain Railway, from Murcia to Granada, with a branch to Águilas, comprising in all a distance of 217 miles. He subsequently became Engineer-in-Chief to this company, which post he occupied until the end of 1891. In 1887 Mr. Higgin was appointed Engineer-in-Chief of the Manila Railway, a line in the Island of Luzon, one of the Philippine group, running from Manila to Dagupan, a distance of 120 miles.

The severe epidemic of cholera in Spain during the years 1884-6 caused Mr. Higgin to again turn his attention to the system of water supply in various parts of that country, and to make an exhaustive inquiry into the causes of the spread of the epidemic, consequent on water-supplies drawn from rivers. The results of this inquiry were given in an article which appeared in Nature. His services were subsequently retained by the London County Council in connection with an inquiry into municipal water supply with regard to the pollution of the River Thames. In the early part of 1891 Mr. Higgin proceeded to Manila on behalf of the Manila Railway Company, for the purpose of making an inspection of the line. On his return journey in June of the same year, he took a slight chill at Hong Kong, and at Salt Lake City was seriously ill. On arriving in England he was found to be suffering from Bright's disease, which was attributed to the chill. For a time his health seemed to improve and he was able to attend regularly to business; in December, however, he again took a chill, which resulted in an attack of what was at first supposed to be facial paralysis, but was subsequently found to be a more serious matter. He was advised to go away and entirely give up business, at any rate for six or eight months, so that he might have complete rest. He could not, however, be induced to give up the direction of the various undertakings he had in hand, and there is no doubt that this in a great measure hastened the end. In the following August he went to Guernsey, to make arrangements for wintering there, and hoping to benefit by the trip. Unfortunately, however, the journey overtasked his physical powers; shortly after his return he had a serious stroke of paraIysis which proved fatal on the 8th of November, 1892.

Only those intimately connected with Mr. Higgin were aware of his indefatigable activity and of how little he spared himself when duty called. In making plans or in general designing he was most particular down to the smallest detail, to which he always gave personal supervision. His leisure was devoted to literature, his most important works being:- "Spain in 1866"; "Arthur Middleton-A biography", published by Tribner ; " Padilla and Other Poems", printed for private circulation ; " A Working-man's Philosophy", published by Chapman and Hall; and "Commercial and Industrial Spain", published in 1886 by Effingham Wilson. Ever ready to assist those in adversity, by his tact and kindness of heart, he made himself universally popular.