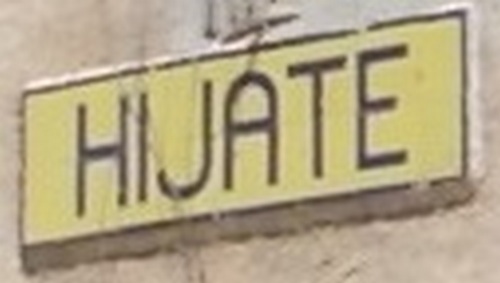 Unimportant commercially. It had a small population and little industry to support the station. However, in the age of steam Hijate was very important as a braking point, being the highest point on the whole of the GSSR. This meant that trains coming from Baza or Zurgena were triple headers, especially goods trains. Triple headers had two locos at the front and one at the rear. These trains were halted at Hijate for two of the locos to be uncouplead to return to their respective stations to start again. To explain why this was necessary it has to be understood that in the 61km between Zurgena and Hijate the track rises 710 metres, and between Caniles and Hijate 141 metres - 462ft (1 in 100). These were important inclines in the days of steam.

It must have been an impressive sight watching a triple header under full steam. Why didn't they use more powerful locomotives? The answer is the weight limitations of the track (14 tons/axle). They did experiment with articulated locomotives with little success.

Actually 2.8km from Hijate. Being used as a goat shed, it is now in an appalling state and probably won't last much longer.