To transfer the iron ore from the mines to the railway, as was done by other companies, a cable system was built.

The cable from the Las Menas main loader in the Sierra de Los Filabres to the Los Canos loader descended through mountainous terrain from 1,483 metres (4,864ft) to 700 metres (2,296ft). Ordered in 1910 and finished in 1918 by Sociedad Minera Cabarga San Miguel, a subsidiary of W.H. Müller & Cia based in The Hague, it carried ore from the San Miguel, Dulce María, and Las Menas mines. It closed in 1968.

Over a total length of 8,104 metres it comprises five sections:

Section 1: A 1,010 metre cable from the Las Menas loader to the Intermediate Loader.

There was also an additional cable to the Las Menas workshops General Warehouse whereby supplies from Los Canos could be delivered directly.

Section 2: A 1,660 metre cable from Mina Dulce María to the Intermediate Loader which ran over the top of the Cortijuelo cable and the village of Rascador.

Section 3: 1,612 metre cable supported by 22 pylons and an intermediate station with a hopper which collected the mineral from Mina San Miguel. The ore was pulled up by a chain with links of 100mm length and 50mm width and with a loading strength of 100kg and weighing 3.06kg/m, from the gorge via an inclined 358 metre plane. The force needed for this (16HP) was obtained from the main cable. The intermediate station had supports for Sections 2, and 3 and a braking station for sections 2, 3 and 4. It comprised two braking systems, one air of 120HP, and an automatic oil brake with water pressure able to restrain 35HP.

Section 4: A 1,892 metre cable supported by 25 pylons and with an intermediate tensioner station which was able to maintain sections 2 and 3 under tension. This was done with counter-weights and a mechanism for tensioning the cables. The weights used were: Section 4 return cable: 10,500kg; Section 3 return cable: 10,000kg; Section 4 loaded (down) cable: 27,000kg and Section 3 loaded (down) cable: 25,000kg.

Section 5: A 2,000 metre cable connecting to the loader at Los Canos. As well as 24 pylons, there was the Ángulo with the brake for Section 5. Additionally, there was a workshop containing a regulator for this section. There were two braking systems, one of 150HP and another automatic oil brake of 35HP which controlled the speed dependent on the tension of the cable.

The cable system was a Bleichert double cable system. The load cable was 40mm diameter, the return 25mm and the tractor cable 27mm. The maximum capacity of the buckets was 525kg and maximum velocity was 2.5m/s (5.6mph) giving 1,200 tons per 10 hour shift. 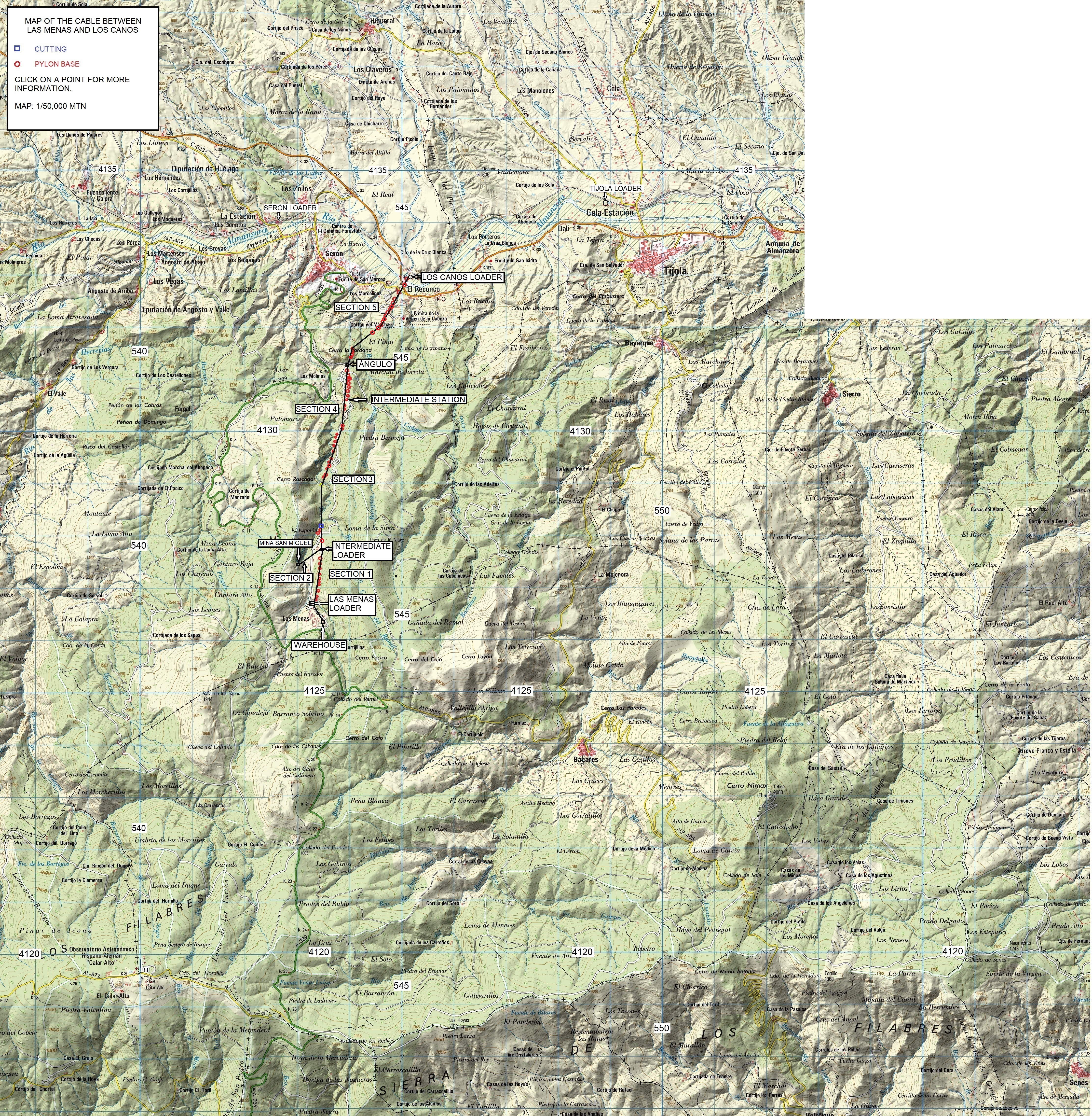