Many of the cables used in the Sierra de Los Filabres were by Adolf Bleichert & Co. and were of the two cable design. This system comprised a support (track) cable which was stationary and fixed to the supports, and a towing (tractor) cable. The track cable was the thicker of the two, and the thickness could be varied depending on the requirements of each section (distance between supports, weight of buckets (carriers), incline etc). The return cable was usually of a smaller diameter due to the reduced weight of the carriers on their return. Note: photographs are from 'Trenton-Bleichert system of aerial tramways, 1914'. 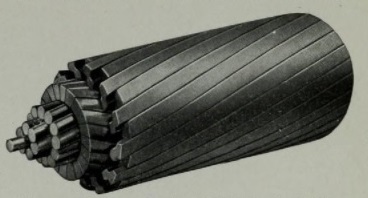 The Trenton-Bleichert cables were different to others in that the indiviual outside cords were flattened so as to present a smooth face to the pulleys and guide rails, thus reducing wear. At least this is what was claimed by the company. There remains what appears to be an example of this type of cable at the Las Menas loader. 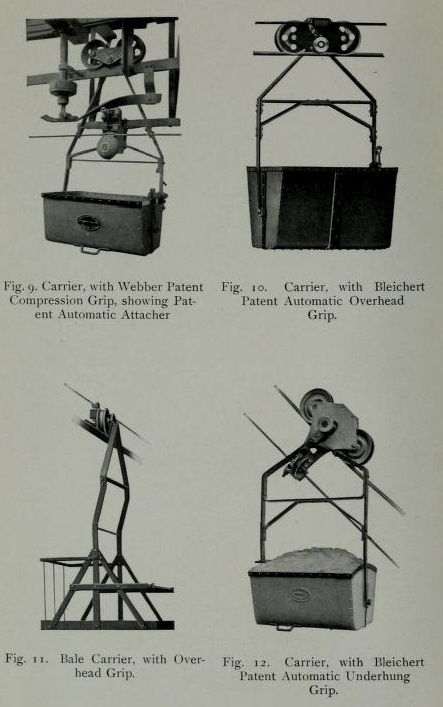 A selection of different carriers were offered by Bleichert & Co. Most of the mines had their own workshops to repair (and manufacture?) the carriers. There was a system for the carrier to be used on a narrow gauge track, of which there were many in the area, without having to transfer the contents. The track simply passed under the loader and the carrier was hooked onto the overhead rail ready for carriage on the cable, or vice versa.

The ordinary carrier, such as used for transporting ore and like material, illustrated in Fig. 9, consists of a carriage that traverses the track cables, from which is pivoted in suspension a hanger that supports a bucket or other receptacle, and above which is a grip by means of which attachment to the traction rope is effected. The carriers move in a continuous circuit at definite intervals, the loaded carriers travelling along one line of track cable, and the empties returning by the companion cable, which in the ordinary constructions is parallel with the loaded line, as already stated. When the carriers arrive at either terminal, or other loading or discharge stations, the grips detach automatically and the carriages are shunted to overhead rails, supported by the structure of the station, and by means of which they are conveyed to the various points of loading or discharge as the case may be. 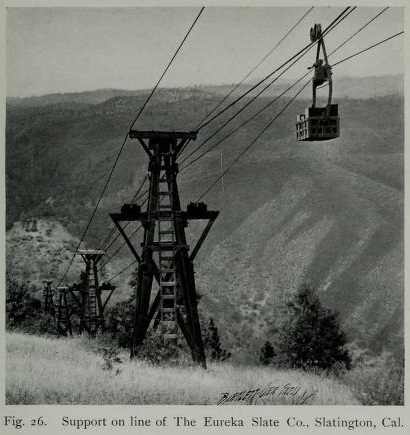 In the case of the cables in Los Filabres, the bases were of stonework with iron pylons. Unfortunately, every single one of the pylons have disappeared so we can only use photographs to divine exactly how the system worked. There are definitely a number of places where the cables spanned a valley, which must have resulted in much swaying on windy days. 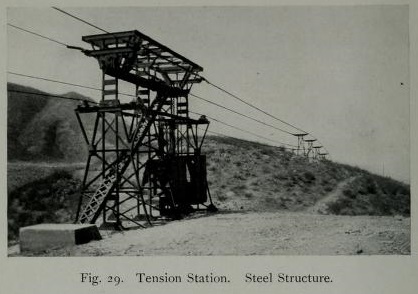 To take up any slack in the system, tensioners had to be used at certain sites on the cable system. These comprised a number of weights of around twenty tons in aggregate hanging from the cable to act as dampers to prevent the cables sagging excessively due to the passage of the carriers, stretching, heat expansion etc. 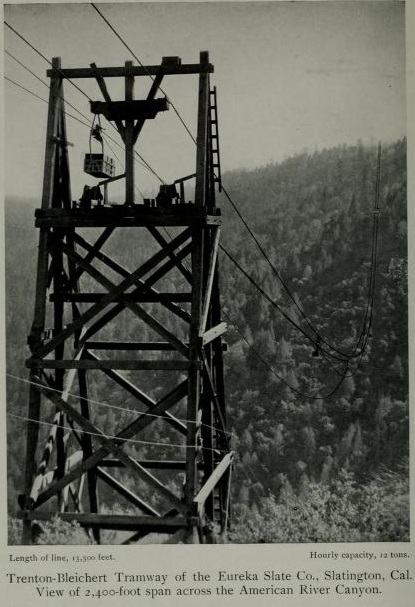 By 1912, the Bleichert company had installed over 3,000 cableways worldwide totalling 1,800 miles, the longest being 34 miles which carried 40 tons per hour, descended 3,350 metres and contained spans across valleys of 800 metres.

The company also offered a number of specialist items such as scales that would weigh the buckets whilst in transit and a greasing device for the traction cable.

The cable systems didn't require any power to work them, they worked solely by gravity - the weight of the loaded carriers returning the empty ones to the top station. However, the speed needed to be controlled, and two systems were used, air brakes and hydraulic controllers (see below). The bases where these were mounted can still be seen in the Ángulo on the Los Menas to Los Canos line. The hydraulic speed controller worked using an oil pump, as stated below in the aforementioned book: 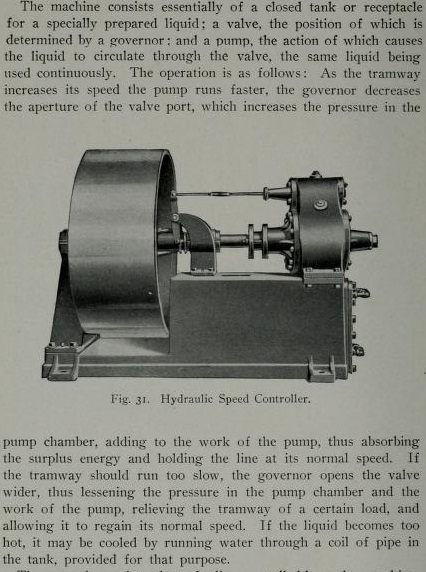 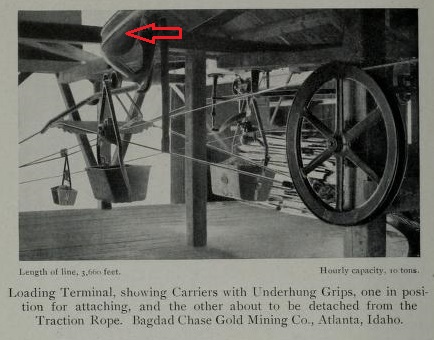 The loading stations at either end of the cable (and in the middle when there was an intermediate station such as an Ángulo) contained mechanisms for the carriers to automatically be released from the cable and placed onto a rail upon which it could roll. In the case of Serón and Los Canos, the slide rails were at right angles to the orientation of the cable, the carriers being pushed along by hand to a point where they could be upended into the hopper. At the top loading station, the carriers passed under chutes that were opened to allow the ore to fill them. There is little documentation as to how these chutes actually worked. The ones in the Hornillo Museum had counterweights to maintain the tension of the shutter on the ore. Presumably, it was quite a skill to get exactly the right amount of ore into each carrier using this method. The rail in the photograph on the left is indicated by the red arrow. The tractor cable is being separated from the carrier, whose weight is being supported by the rail, which presumably has a slight downward incline.

In 1916 Adolf Bleichert & Co was bought out by The British Ropeway Engineering Co. 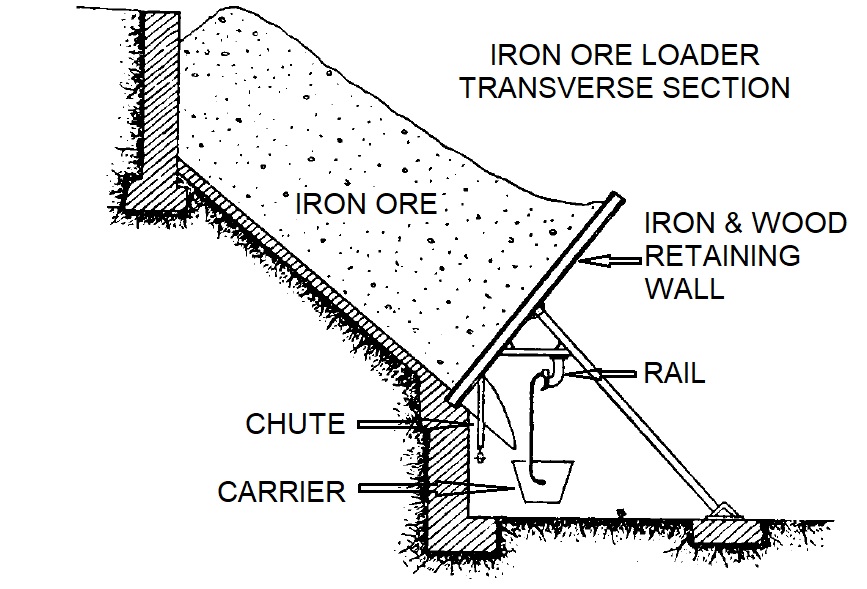 The ore had to be loaded into the carriers in some way. Manual loading with a shovel is very labour intensive, so huge loaders were built. The most impressive of these were at Serón, Los Canos and Las Menas, all of which were the terminal loaders for the loading of The GSSR trains. 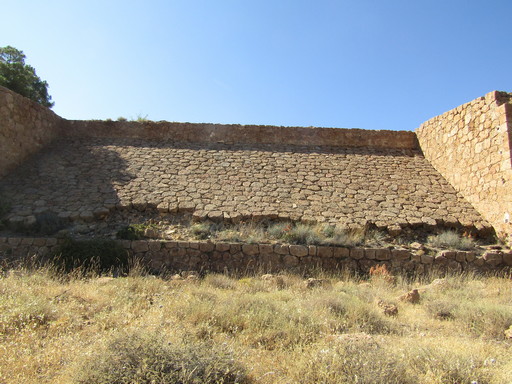 Most of the mines in the Sierra de Los Filabres had their own loader as well, such as that in the photograph on the right of the San Ignacio loader. The figure on the left shows a cross section of a loader. These were built on the side of a hill and were, by necessity, large structures. The empty carriers were brought to the loaders by cable, were then disconnected from the cable and allowed to run on a rail. Once under a chute the shutter was opened and the carrier was filled (usually with about half a ton of ore) whereby it was returned to the cable to be carried down to one of the loaders on The GSSR line. All that is left to see nowadays are the stonework walls and bases.

For videos of cable systems in use, see:

See here for map of all cables.